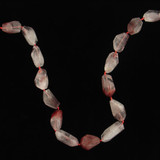 Rose Quartz (pink) represents the spiritual heart chakra, which is positioned at the center of the chest. It connects us in love to all. Rose Quartz the 'Love Stone' aids in forgiveness and compassion.