The elegance and lasting beauty of a strand of pearls is timeless. There has never been a period in history where pearls were not en vogue. In the modern world, natural pearls are both rare and expensive. If it was not for the technology of cultured pearls, most of us would not be able to own pearls today. It is miraculous how a pearl is created but how many of us know the process or man's role in expanding pearl production?

The Mystique Of Pearls Revealed

In 1916, Kokichi Mikimoto patented a technique to produce round cultured pearls. While the name "Mikimoto" is the most well know name synonymous to cultured pearls, the original technique of using a piece of mantle tissue from one oyster and implanting into another is credited to an Australian named William Saville-Kent. As this technique was perfected, Mikimoto later purchased the rights from Saville-Kent. 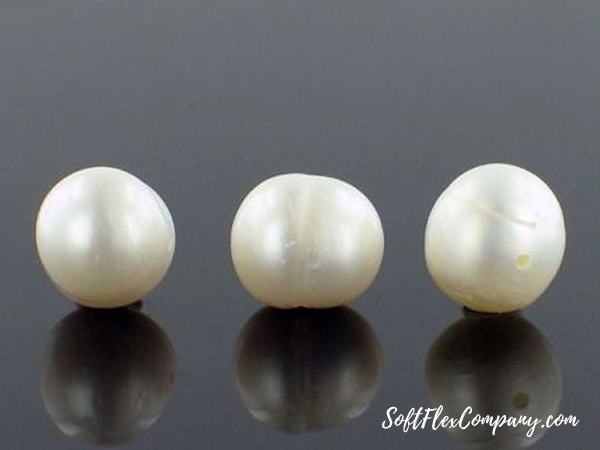 Today's pearl market is a cultured pearl market and it is because of the continual technological advancements that more of us are able to enjoy this gem. The pearl is an organic "living" gem produced by only a few of the 100,000 different types of saltwater and freshwater mollusks. Mollusks are soft bodied animals, like oysters, clams, mussels, etc that are protected by a hard exterior shell. In the natural world, an irritant finds its way into the mollusk's shell and in an attempt to rid this irritant, the mollusk begins to produce a secretion, brownish in color called conchiolin. Another substance called nacre, composing of microscopic crystals of calcium carbonate, is also secreted and is combined with the conchiolin. The buildup of concentric layers of nacre envelops the irritant to produce a pearl. As the crystals align, a prismatic effect takes place that gives the pearl a soft iridescence called orient, over the pearl's surface.

Because of pollution and over fishing, man now aids the production of pearls by introducing the irritant artificially. Therefore the main difference between a natural pearl and a cultured pearl is that the natural pearl is created on its own. A fine pearl requires a cultivation of 2 to 3 years for the oyster to secrete sufficient nacre. Most commercial freshwater cultured pearls take from as little as 6 months to 2 years to produce. Implanting generally occurs in Jan/Feb with harvesting in November. Several pearls may be produced within the same mollusk, but implanted at different times, based on the size of the irritant. The different shapes of irritant (or nucleus) that are implanted create an interesting array of pearls available today. The size and shape of the mother of pearl nucleus determines the final size and shape of the pearl. If the cultivation period is too short, the nacre will be thinner and the pearls will not last. However, too long of a cultivation period can also result in fewer round or spotless pearls. 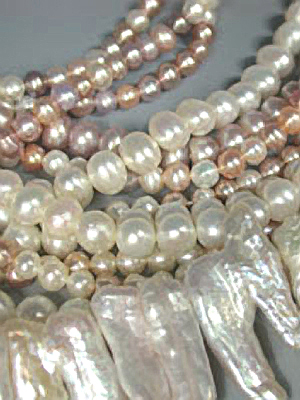 Types of Pearls: (the most common varieties are covered)


The variety of pearls in today's market can be overwhelming. Where do you begin? What are your preferences to color, shape and size? The key is understanding what is available and educating yourself to recognize quality differences to get the most bang for your bucks.

Akoya - are round, white and luminescent pearls which rarely exceed 10mm, originally produced in Japan, but are now being produced in China.

Biwa  - are pearls cultivated originally in Japan's Lake Biwa. Today, the term generally refers to any freshwater pearls. The most popular shape of this pearl is the stick pearl. Cultivation uses mantle tissue to allow for mass production and does not require a nucleus implant. Most freshwater pearls are cultured in the margaritifera mussel.

Mabe  - is a dome shaped pearl, generally round or pear shape produced by the oyster Pteria penguin. A hemispherical shaped piece of plastic is placed on the side of the interior shell. Nacre covers the plastic but when the pearl is removed from the shell, there is a hollow which is later filled with epoxy and backed with mother of pearl. These pearls are not durable and are fragile. Extra care must be taken to avoid nacre from cracking or peeling. They are often used for earrings and rings.

Blister Pearls  - is a solid dome shaped pearl similar to the Mabe grown around a mother of pearl nucleus inside a mollusk shell. It contains high luster, iridescence and is more durable than the Mabe.

Seed Pearls - are natural pearls that are less than 2mm in size. Seed pearls occur in both salt and freshwaters.

Keshi  - are baroque pearls "accidentally" produced in saltwater oysters during pearl production. They are all nacre and are produced when the oyster rejects the implant during cultivation. Because there is a limited amount of nacre an oyster can produce, technological advances have improved, to reduce the production of keshi pearls. The more keshi pearls that result in harvesting, the less round pearls are produced. These pearls are highly coveted due to their possible future rarity.

South Sea Pearls  - are very large, white pearls known as the "queen" of cultured pearls. They are produced by only the Pinctada maxima saltwater oyster. They are very rare and start from 10mm and up. Pearls are cultivated much longer, having a thicker nacre coating, which commands a higher market price. These are very beautiful and costly.

Black Pearls - are also known as the Tahitian Black Pearl, produced by a special variety of the Pinctada oyster. They are sometimes combined in the same category as the South Sea pearls, but instead of occurring in white shades, occurs in a range from gray to black in sizes ranging from 8mm to as large as 20mm. Fine black pearls are rare, beautiful and costly.

BE AWARE of imitation pearls, also known as "faux" and "simulated", which are not created by a mollusk. These pearls are made from glass, plastic or mother of pearl beads dipped in lacquer. The differences are very obvious when you observe the depth of luster, by touch and by weight. 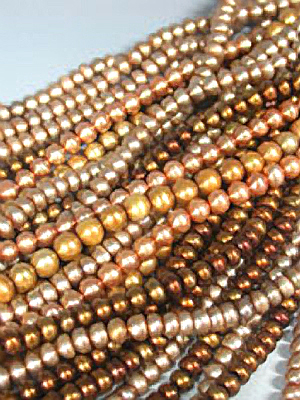 Evaluating the Color and Shape


There are more and more colors of pearls being produced today than ever before, but how is this done and will the colors last?

Pearls are naturally found in shades of white, gray, black, pink, peach, mauve, green, blue and gold, depending on the mollusks used to cultivate them and their location. While there are many colors that occur naturally, most fancy colors are created artificially. Even some white pearls are bleached and then dyed again to introduce desirable tints. If the pearl is dyed you may see a line separating the nucleus and the nacre with a jeweler's loupe. There are no perfect pearls, so you must evaluate the most important factors to your personal tastes. Take time to look at your pearl strands to avoid cracks, thin nacre and excessive blemishes like spots, blisters, rings, etc before you purchase them.

Today you can find pearls in almost any shape imaginable. The most expensive are the perfectly round pearl. Even pearls that are not perfectly round but close can be expensive. Look for balance, luster and well matched pearls in your strand if you are working on a project that requires uniformity. Baroque style pearls are also fun, when shape may not be as important, by adding wonderful texture to your piece. 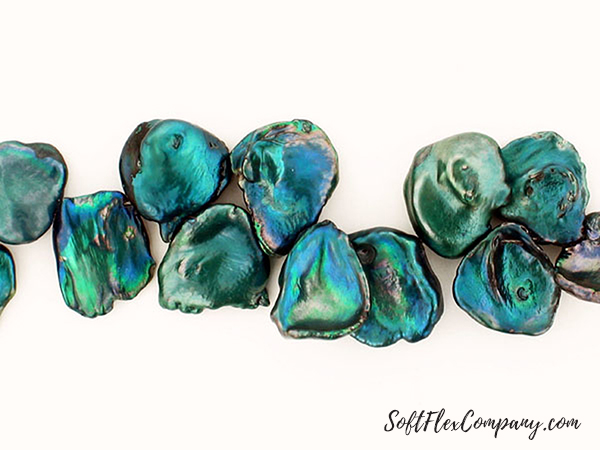 
Man continues to attempt to improve the marketability of pearls by offering a range of shapes, sizes, and colors in the commercial marketplace. It is important to be aware of the types of treatments used in pearls and to evaluate its effect on appearance, costs, and durability.

Luster is so very important and because there will be times when pearls are cultivated with less than desirable luster or are damaged during processing, manufacturers will employ artificial methods for enhancement. ANY treatment may reduce the life of the pearl if the thickness of the nacre is compromised. The following are some of the treatments used in pearl production:

Chemical bleaching - is used to create whiter pearls to remove spots and blemishes. This however thins the nacre reducing the hardness, making the pearl softer and more susceptible to damage. To bleach pearls, they are first drilled and then placed in a bleaching solution that removes the brown conchiolin layer, leaving a uniform appearance.

Dyeing - is used to create a uniform desirable color after the pearl has been chemically bleached. After bleaching, the pearl may seem "lifeless" therefore pearls can be dyed in a multitude of colors. Because pearls are porous, they can take dyes easily. Dyed pearls may fade over time though if not cared for properly. Dyed pearls can be detected by examining the drilled hole with a jeweler's loupe.

Irradiation - is used to transform inexpensive pearls to black pearls. Gamma -ray radiation darkens the nucleus, resulting in a pearl that closely resembles the more expensive South Sea pearls. Irradiation also enhances the iridescent orient of the pearl. The pearl retains no radioactivity and the enhancement is harmless to people. This treatment is believed to be permanent.

Silver nitrate - is generally used in China to transform off colored pearls to resemble the more expensive South Sea black pearls. Use of silver nitrate is the most detrimental to a pearl's life, making the nacre very soft and thus less durable. 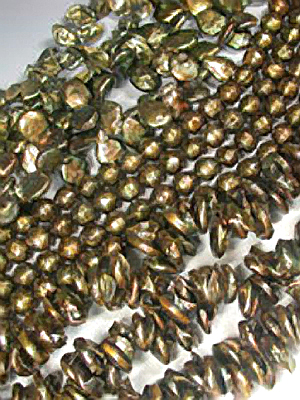 Caring for Your Pearls: Do's and Don'ts

I hope I have clarified and summarized some questions you may have had on pearls, June's modern birthstone. There are many books on pearls and I encourage you to visit your library or the local book store to discover more on this subject. The many enticing shapes and wondrous colors of pearls available today, make beading exciting and fun. Have a great time shopping for your next strand(s) of pearls!

Join our Facebook group – VIB. Stay in the know. Stay up to date. From our bead shows to our video shows and sales, you can stay in touch with us. The community is full of artistic and helpful beaders and crafty people. Inspire and be inspired. Share your pictures and get the beading bug from others! 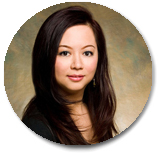 Lisa Kan is a glass bead artist, jewelry designer and author. As an avid researcher and bead purveyor, she hopes to share her knowledge about beads through her writings. She has written articles for Australian Beading, Beadwork, Stringing, Step by Step Beads, Bead Unique, Bead Trends, BeadStyle, Bead&Button and Simply Beads magazines. Her first book, Bead Romantique, is available on Amazon and Interweave Press.
Website:  www.LisaKan.com
Blog:  http://LisaKan.blogspot.com
Email:  LisaKanDesigns@yahoo.com