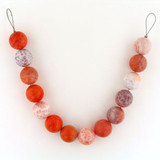 Agate is a vibrantly colorful, often banded variety of Chalcedony Quartz. It was discovered sometime between 400 and 300 BC by a Greek Philosopher named Theophrastus. It often occurs in volcanic rocks and ancient lava flows. A petrified wood variant of Agate is found in abundance in Arizona.

Fire Agate (orange) represents the sacral chakra. It is positioned at the center of the abdomen, which rules the reproductive system. Fire Agate helps balance Yin and Yang energy, it helps one discover truth, accept fate and strengthen the body and mind. Fire Agate is the birthstone for May/ Gemini.